Facebook Workplace to Slack
building simple a service with Elixir

We are using Slack extensively at work. But some parts of the company like FB Workplace for posting updates. As we are remote company, we need to keep these type of information accessible. This lead to development of simple workplace2slack service. I’ve also got interested in Elixir, so I took this pet project as a good motivation for starting with it. Please note, that I’m quite new to the language, so do your search before committing to stuff mentioned here.

Complete code is available at github.

I have decided not to use Phoenix as I wanted to explore Plug a bit more. Not sure, if that was necessary but just Elixir and Plug turned to be more than enough for this little project. I assume, that you have Elixir already installed.

Let’s start with mix new workplace2slack --sup which will create a new Elixir project with preconfigured supervision tree. As we are building http API server, we need to add means of handling http. We will do that through plug (which is pluggable set of processors handling your request, similar to rack from Ruby world) and cowboy which is go to http server in Elixir world. We add project dependencies in mix.exs:

I have also added Jason which is one of the Elixir JSON parsers. We will use it for (de-)serialization of incoming and outgoing requests. Running mix deps.get wil fetch all missing dependencies for you.

HTTP routing is facilitated with a router. We add one to lib/slackolixir/router.ex:

Couple things happening here – as you can see Router is Plug by itself and also defines plug pipeline (:match, Plug.RequestId, Plug.Logger, Plug.Parsers, :dispatch). The really needed are only :match and :dispatch. I am using others to:

Last missing thing is to run http server as an entry point for our application. We do it at lib/workplace2slack/application.ex by adding a new child to our supervision tree:

I want to use freshly stabilized releases. Go ahead and initialize releases with mix release.init and creating basic configuration file (I believe, it is needed to be sure, that Gigalixir picks up the fact, that you want to use mix release):

You should be able to run mix release which will create the release for your.

We can now run our release with

and make our first request

I am using a free tier of Gigalixir for deploying this project at the moment. We will create a Dockerfile in later stage to be able to deploy it to our infrastructure. But Gigalixir allows for super simple deployment (no affiliation :)). Just be aware, that you can specify region and provider when creating application with gigalixir create. I have not found a way how to change it later, so be sure, that you have picked the right one (I am in EU, so I went for gcp and europe-west1 region).

You also need to tell Gigalixir, which version of erlang/elixir you want to use. That is done via elixir_buildpack.config in the root of your project:

We are now ready to deploy to Gigalixir. The requirement is to be able to respond to /health healthiness probes. Which we already have in our Router. You can monitor logs from your application with gigalixir logs.

First you will need to setup integration on the Workplace side. Go to Integrations at your admin section and create a new custom integration. Allow Read group content permission and configure webhook

When you hit Save, Facebook will make a GET request to your defined endpoint to verify that you are able to respond. You can verify the shared challenge as well, which will get passed to the endpoint, so you can verify that it is coming from your integration. To confirm pairing, endpoint has to return value of hub.challenge.

Note: This article is not trying to filter out messages or route messages from different groups to different channels. Our use-case for Workplace is so simple, that sending all message to one Slack channel is enough. Described setup may lead to disclosure of content from private groups!

Got to your Slack and create a new application. You need to do two things at your OAuth & Permissions screen:

Now we have a working service, which can receive events from the Workplace. Next, we want to parse them, and later on send them to Slack. The following code is probably beyond need for being split into module and multiple methods. But let’s live with that for now. Add a new method to our router, which will handle POST from Workplace:

Function Workplace.extract_image_url is a little helper which parses out URLs of images attached to the original post. So those can be then attached to Slack notification message. Check the Workplace2Slack.Workplace module for the actual implementation.

Every message from Facebook is signed with signature being carried in X-Hub-Signature http header. We definitely want to verify it, otherwise we would start posting spam to our Slack.

First of all, we need to get access to original body of the POST request. That is discarded by Plug.Parser during processing. Fortunately, an option for defining a custom body parser has been recently added. We just need to extend our plug pipeline in router as follows:

This copies original body into body_raw attribute of the conn passed around. Which seems to be suboptimal solution, which may be reworked later on.

The actual validator is then called at the very top of message handled. My initial implementation was creating a custom Plug to do so, but then I realized that I really need it only for one call. Otherwise I would keep it and implement an option like except_path to disable it for certain routes. Code itself is straightforward and checks that HMAC signature of body and shared secret (that’s the App Secret you can get from the Workplace integration screen) matches with value of the header. You can check Workplace2Slack.HubSignature for the actual implementation.

This could have been easily implemented as a GenServer, but I wanted to explore proper job queue a bit. Honeydew seems to be quite popular within the community. Only gotcha is that default in-memory queue utilizes Mnesia, so don’t forget to add :mnesia into your extra_applications within mix.exs otherwise it will not get included into the release.

We will also need to add some dependencies, already mentioned honeydew and httpoison for making http calls towards Slack API. Just add the following to deps in your mix.exs:

We just start a new queue and worker in our application.ex:

and also define worker Workplace2Slack.SlackWorker, which just send the message to Slack via their API. And that’s it.

As you may guess, I had secrets (slack token and FB App Secret) hard-coded in the application configuration. It turns out, that releases make live configuration much easier then with previous version of Elixir. Secret sauce is the fact that config/releases.exs will get evaluated when the release is going to be started. So the following (complete content of config/releases.exs) will do exactly what you expect:

If you are running on Gigalixir, you can set your env with

So next time, somebody posts an update to Workplace such as 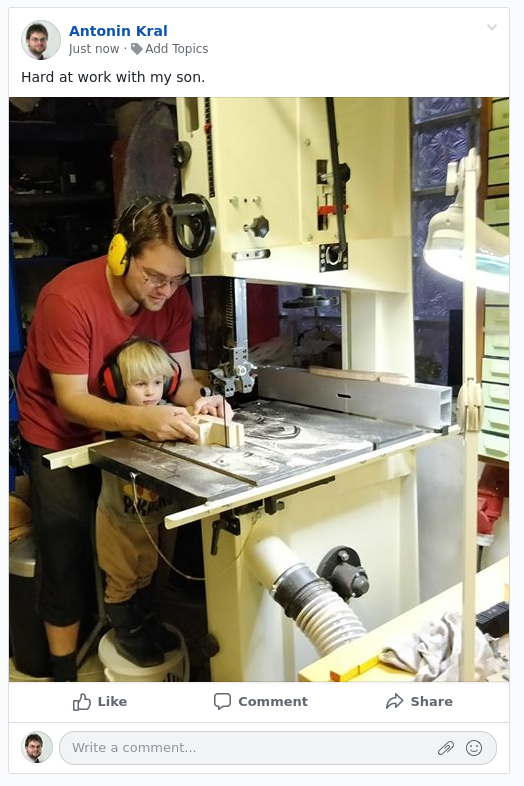 you will get a nice notification in your Slack channel 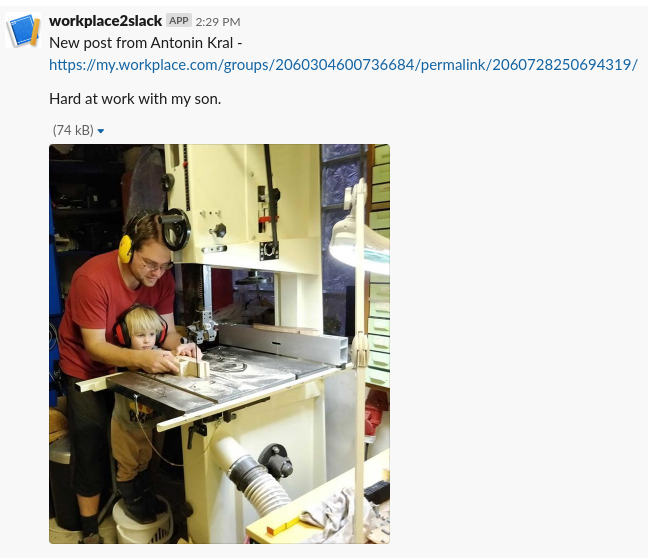 No need to have Workplace tab opened anymore!

← blog archive propose changes to the article tweet your response